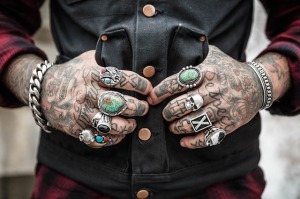 It comes with the territory. I get asked to draw some weird stuff.

I’ve done baby faces on 300 lbs. men’s biceps. I’ve done “Love ya, Ma” in anchors, as guys leave for the Navy. I’ve done flowers and “Sisterhood of Yaya Traveling Pants” or something on so many sorority girls, I started doing it eyes closed. I’ve done sexualized versions of every cartoon character, almost every Bible verse there is, and then a mash-up of those two.

But the strangest one was so much more mundane than any of those. And then it changed my life. I tattooed a growing tally on someone’s arm.

It started out on a late Thursday night. It was about 15 minutes before closing. I was about to start cleaning and disinfecting everything, when this guy walked in. Pretty normal looking guy, not my typical customer, but who was I to judge who wanted ink.

He asked for a simple, small tattoo: a black line.

Not a big deal. It took a couple minutes. He paid, and left. Another satisfied customer, I thought.

A week later, again late Thursday night, he returned, asking for another black line. He wanted it beside the first one. I thought strange, but let it slide. It would only get worse.