HOW TO FIX IT: Hellboy 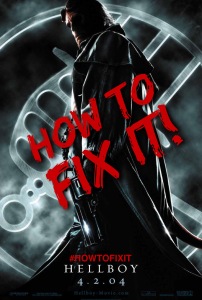 In World War II, Hitler sought out any weapon that he could use to win. That included religious and spiritual weapons. During a ritual done by the Nazis, a demon was conjured and brought to Earth. But it wasn’t the Nazis that raised this demon. It was under the watchful eye of an American scientist, teaching this demon to become a defender of the earth and warrior against the forces of darkness. His name was Hellboy.

It’s a good movie, but that doesn’t mean that it doesn’t have some flaws. Here’s how I would fix Hellboy.

There are some movies that are made ahead of their time. Not that Hellboy wasn’t a great movie or well received in its time, but the execution may have been truer to the director’s vision if technology had been more advanced.

There are moments when the transition between puppets and CGI is very apparent. Not necessarily so bad that it takes you out of the film, but noticeable considering the current state of CGI. I think that Hellboy would have been a higher caliber film if it was blessed to be made in this age of better film technology.

I can’t speak to the character or story very much. I was never invested in Hellboy or the related comics. But I do think that some reining in of the story would have helped. Every first film in a franchise has the unfortunate duty of telling the origin story, but an origin story by itself isn’t good enough. There needs to be a battle, a quest, a story of good over evil as well. Hellboy isn’t the first movie to face this issue, nor are they the first to handle it poorly. (To be far, it’s not easy to do all this.)

I could name all the characters and ideas and subplots, but it would get to be too confusing. And that is it. There was too much pushed in. Too many things that could have been so much more. I’ll give one example.

Hellboy is from hell, but has been raised on earth. There is a simple but wonderfully complicated problem of nature vs. nurture. The issue is raised when Hellboy is shown grinding down his horns. He doesn’t want to be evil or associated with, but can’t escape that aspect of himself.

It would have been great to see Hellboy actually struggle with that. To see him give in to the evil, to take his place in Hell, or use the powers of Hell to attempt to do some good only to watch it all backfire on him. This would have made for great ‘coming of age’ story, something that is lacking the cacophony of superhero movies we have now. We could see Hellboy in his native hellish form, horns and all, battle against those he loves on earth.

It would be great, you wouldn’t need a villain to kill. You could have someone like Rasputin (the movie’s main villain) start something, only to return in the second film. It could be all about Hellboy, rather than the running muck of origin films.

I may have some criticisms of Hellboy, but that doesn’t mean that it is a terrible movie. I give this movie 3 out of 5 stars. There are many clever moment, some nice monster costumes, and well cast characters.

And that is How To Fix It!